Click to save as artist's preferred kit
Paper Mounted? ★★★☆☆ Details
Paper print only, too large to frame online.
Frames Choose a color » 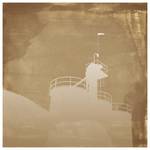 More from the same collection View All

John Beck McConnico is a fine artist, designer, and creative director who lives and works in the San Francisco Bay Area.

Originally from Memphis, Tennessee, he has lived in California since the Summer of 1993. John graduated from Otis-Parsons School of Design in Los Angeles and also studied Fine Art & Photography at The Memphis College of Art. He works in a variety of mediums, including paint, collage, digital media, and assemblage.

Being inspired by urban and rural architectural structures, his mixed media artwork reflects the industrial fabric that makes up our current landscape. It is often the overlooked and "banal" visual details that create a distinctive environment as today's world becomes more homogenized. It is this balance between Past/Future and Manufactured/Rustic that informs his current work.